In THE GREAT COMIC BOOK HEROES (1965), Jules Feiffer wrote: "Well, I can't comment on the image girls had of Wonder Woman.  I never knew they read her -- or any comic book.  That girls had a preference for my brand of literature would have been more of a frightening image to me than any number of men being beaten up by Wonder Woman."

Perhaps Feiffer, who was 15 years old in 1944, was too infatuated with the budding curves of the opposite sex to notice what they were reading; or maybe he hadn't noticed them at all, because he "stayed in the house all day and drew pictures."

Girls might not have been as interested as the boys were in superdummies punching each other in the face, but there were alternatives available in abundance: Archie and other teen humour comics; funny animal comics; romance comics; and career girls, like Millie the Model, Tessie the Typist and Katy Keene.

Below is some photographic evidence that girls read comics.  I was able to date a number of the photos by identifying some of the comics.  All were taken prior to 1960. 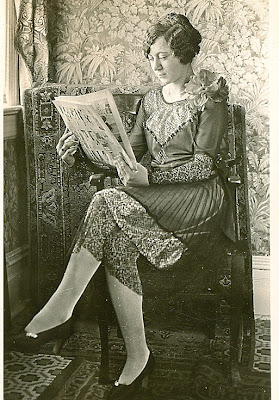 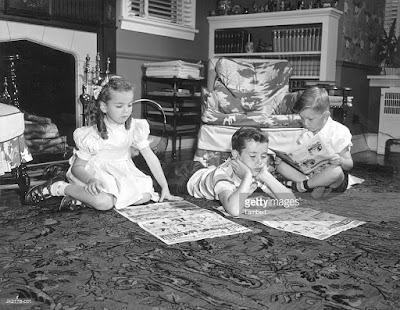 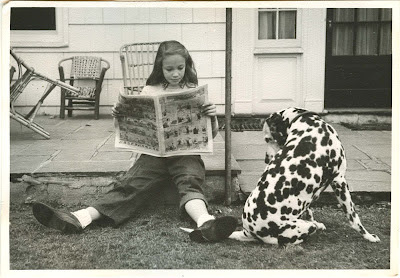 Posted by Richard Beland at 2:09 pm

I love these images. What's the source or what are the sources?

great stuff, like a certain history of comics! thank you for collecting (and sources would be great)

Thank you so much! It means a great deal to see these photos and be able to prove visually, that girls have always read comics in close-to-equal numbers as boys.
If you can find the sources, that info would be great, but I'm still glad to have seen them

Each image is from a different source, most of which had nothing to do with comics, collected over a period of months. I didn't make a note of where each one came from.

These are priceless! Thanks for finding and sharing them!

Great photos! I recently published READING COMICS (postcard book) with similar vintage photos. Are these "Girls Read Comics" images from a single collection? I'm seriously considering a sequel or new book and would love to know if these are available. Please contact me. ---Denis Kitchen denis@deniskitchen.com

That is wonderful. Thank you!!!

Sorry for the delayed response, Unk. Thanks, especially for the info on photo #44 (the two girls sitting on the floor with a pile of comics). I'd never heard of THE LITTLE PEOPLE.

Pic #11: the cover is as plain as day, but I somehow neglected to include the information.

As for photo #21 (the three kids in the poorly lit store), it's impossible to say with absolute certainty that it's NEW FUNNIES #161 (July 1950) since only the logo is visible, and they used the same images along the left side for a number of issues. The date on the cover is short, looking like either June or July, certainly not August, and anyways the background colour is dark, whereas the August issue is a bright yellow. However, as the other comics are dated July and August, it's a safe bet that it's the July issue.

I agree. Seeing Girls reading Comic Books is great.
My Sister & I always read them together, when we were growing up in San Francisco.