I'm a big fan of Harold Gray's Little Orphan Annie, especially the strips produced during the '20s and '30s.  Annie was quite the character in them there days.  She was tough, bold and somewhat belligerent.  She had to be.  She often lived on her own or on the streets, mostly during the Depression.  She had a tremendous work ethic, though, and managed to take care of herself, as well as help others.  Smart, independent, resourceful, a real survivor.  She charmed her way into the good graces of strangers -- but also made a lot of enemies.  She stood up to bullies and gave them a black eye or a bleeding nose.  And she always managed to out-smart thieves and murderers and creeps; occasionally "Daddy" would come to the rescue and beat their faces in.  It was a brutal world, but worth living in for the sweeter moments.

Annie (the character and the strip) reflected a lot of Gray's conservative politics, and it's hard to imagine that a strip so dependent on the creator's philosophy was able to continue after his death in 1968, except that kids liked Annie and probably didn't notice -- or care -- that Gray was dead, as long as the strip lived on.  It just barely survived until that consummate professional, Leonard Starr, came along in 1979.

Here is a complete Annie story, which ran from September 22, 1985 to January 11, 1986.  This swell yarn was written and drawn by Starr.  It's an eerie mystery, as well as a heart-breaker.  I really liked it, so I collected the strips myself, but for some reason it looks like I clipped them from the newspaper using a pair of garden shears.

Unfortunately, the print was terrible back then, so I did my best to make the images legible.  Minor caveat: the December 31 daily is missing, but it makes no difference in the scheme of things.  A new storyline begins in the last panel of the January 5, 1986 Sunday comic, with a sort of anti-climax to the preceding story continuing for the rest of the week, which I included.

The scans are nice and big for those of you whose eyes are shot. 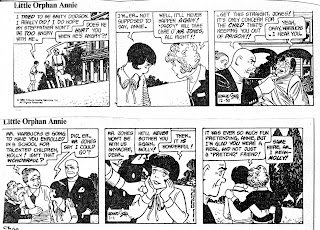 Thanks for this great Leonard Starr story, I love his version of Annie! If you have any more Annie stories by him in your collection, I'd love to see them. :) It's a shame so little of his work on this strip has been collected in book form anywhere.

I'm glad you enjoyed it. Unfortunately, I never bothered to collect any of Starr's other ANNIE stories.

I remember being impressed with Starr's work on this strip. I knew of him, vaguely, from his longtime work on "On Stage," but only realized how good he was when he became the first artist after Grey whose work on Annie wasn't vaguely embarrassing. It was, in fact, head and shoulders above the usual 'continuation' of a famous strip, and fully worth reading. He was right in the tradition of the original, with solid draftsmanship that went well beyond trying to pick up some of the surface of another artist's style.

Thanks so much! Not only for preserving these, but for presenting them here.

It was a lot of work clipping these Annie dailies and Sundays from newspapers, preserving them for 30 years, scanning, cropping, resizing and enhancing them, then uploading them to this blog one by one and typing out the dates -- but it's all worth it if even one person who hasn't read this story before is thrilled and entertained by it.