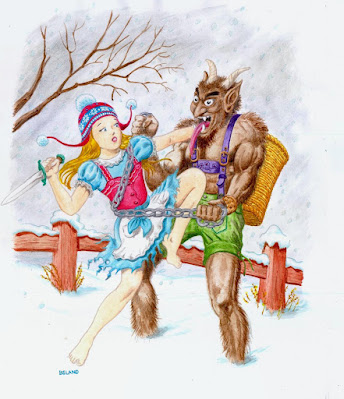 This blog is still alive, even though there hasn't been a post in two years.  And to prove it's been alive the past two years, I'm posting this two-year-old comic, just in time for the Christmas season.  It features May the Hyperborean, a little barbarian girl, in "The Night Before Frostmas".  (Frostmas, as everyone knows, is the first day of winter.)

May's travels have taken her (and her dog, Digger) from the northern country of Hyperborea, to towns that exist in various historical eras, simply because they do.  "The Pied-Pirate" has a 1940s setting, and her next comic adventure, "The Night Before Frostmas", is set in the Victorian era.  I'm currently working on her next comic, in which she's hired to star in a thrilling silent film serial in the late 1910s, and in which she also battles a villainous hunchback who brings gargoyles to life.

I'm also working on a new post for Jungle Frolics, but it'll no doubt be a few more months before it's completed.  In the meantime, I hope this Christmas tale is better than a lump of coal in your stocking.

Posted by Richard Beland at 9:40 am No comments: