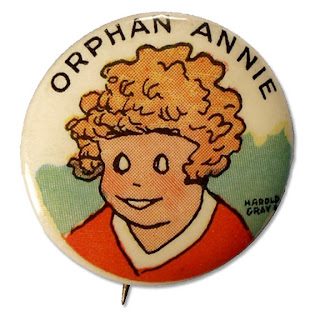 Little Orphan Annie's creator, Harold Gray, was born on his parents' farm in Illinois, but says he didn't like farm life.  He wistfully dreamt of other things and started drawing comic strips to entertain himself, and in 1913 began getting his cartoons published in small town journals and, later, in his college yearbook.

In 1917, Gray graduated from Purdue University with a degree in engineering and, still a country bumpkin, walked into the offices of the Chicago Tribune looking for a job in the art department.  Despite a letter of introduction by John T. McCutcheon, the Tribune's editorial cartoonist of many years, the art editor had no work for him.

After a stint in the army and odd jobs as a commercial artist, Gray went to work for Sidney Smith, creator of the extremely popular Gumps newspaper strip, in 1920.  He assisted Smith with lettering and backgrounds.  In 1922, Smith signed a million-dollar contract, $100,000 a year for ten years.  Not surprisingly, Gray began submitting ideas for his own strips to Joseph Medill Patterson, owner of the Tribune.  Patterson, who took an active interest in his paper's comic strips, rejected Gray's proposals, until he came up with Little Orphan Annie in 1924.

In one version of the story, Gray's original concept was a boy, Little Orphan Otto, and Patterson suggested changing the character to a girl, Little Orphan Annie.  But as Gray himself told the story in 1951, he'd met a homeless waif on the street who was both tough and wise beyond her years, and she left an impression on him:

"She had common sense, knew how to take care of herself.  She had to.  Her name was Annie.  At the time some 40 strips were using boys as the main characters; only three were using girls. I chose Annie for mine, and made her an orphan, so she'd have no family, no tangling alliances, but freedom to go where she pleased."

If Gray's story is accurate, it would have only made sense to title his strip "Little Orphan Annie", after the popular 1885 poem, "Little Orphant Annie", by James Whitcomb Riley.

In any case, the strip was accepted, and dailies debuted on August 5, 1924 in Patterson's tabloid, The Daily News.  Gray was 30 years old.  Sunday strips began appearing in the Tribune on November 2, followed by the dailies a week later.  It was picked up by other papers in syndication, and soon became one of the most popular and lucrative comic strips around, making Gray a wealthy man.

Despite the strip's violence and gritty realism, and Gray's conservative views reflected in the characters of Annie and "Daddy" Warbucks, which often caused controversy, kids loved Little Orphan Annie.  By the beginning of the 1930s, Annie was appearing in 320 newspapers and Gray was making more money than his mentor, Sidney Smith, through merchandising.  (Smith had just signed a new contract in 1935 for $150,000 a year, when he perished in a car accident.)  At the time of his death in 1968, Gray was a millionaire five times over.

Cupples & Leon, publisher of children's books, as well as collections of newspaper strips, reprinted Annie's adventures from 1926 to 1934, a total of nine hardcover volumes.  The 92-page books, edited by Gray himself, sold for 60 cents each.

Whitman began publishing their Big Little Book series in 1932, and Little Orphan Annie got littler.  There were many Annie books in the series throughout the 1930s and 1940s, and, like Cupples & Leon, Whitman adapted the newspaper strips into their diminutive format.

And there were others, including Whitman's even smaller Wee Little Books, and numerous comic books published by Dell, some of them giveaways, most of which reprinted the newspaper strip. 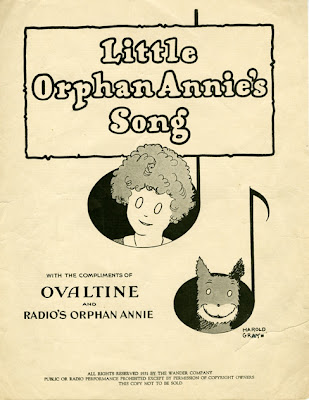 The Little Orphan Annie radio show debuted on WGN Chicago, owned by the Tribune, in 1936, starring 10-year-old Shirley Bell, already a veteran radio performer, as Annie.  She would play the 10-year-old urchin for the next ten years -- and make good money doing it.  On April 6, 1931, the show was picked up by the NBC Blue Network and Ovaltine became the sponsor.  For the next two years there was a San Francisco cast, with Floy Hughes as Annie, but they were dropped when technology allowed the original Chicago show to be broadcast from coast to coast.  (During a contract dispute in 1934 and 1935, Bobbe Dean played Annie.)  The show moved to NBC in 1936, and then Mutual on January 22, 1940, at which point Quaker Puffed Wheat Sparkies became the new sponsor, and Janice Gilbert the new Annie.  The final show aired on April 26, 1942. 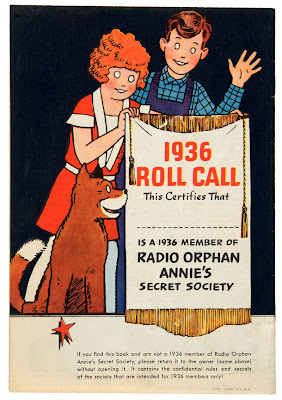 Every day millions of kids tuned in at 5:45 p.m. to listen to Annie's adventures, though half of the 15-minute time slot was taken up by an announcer vigorously hawking Ovaltine and the endless parade of Little Orphan Annie premiums, including a secret decoder ring and mugs to drink your Ovaltine from, which could be obtained by mailing the aluminum seal from the can, and perhaps a dime, to "Little Orphan Annie, Chicago, Illinois; or, if you live in Canada, mail it to Ovaltine, Peterborough, Ontario."  Boys and girls were encouraged to get their mothers to pick up a can of Ovaltine from the grocery store because, "even if you have some at home now, you'll be needing another can pretty soon anyway!" 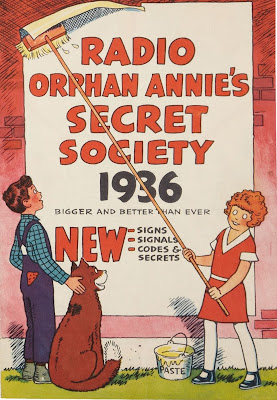 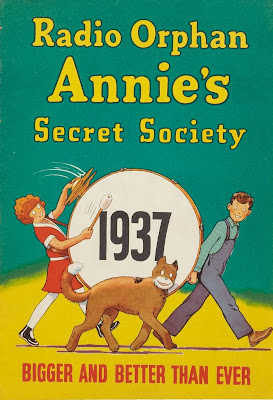 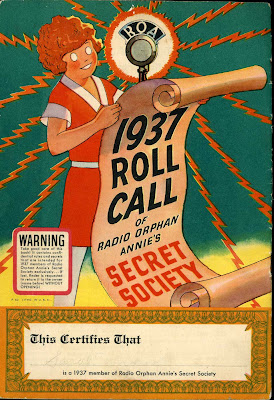 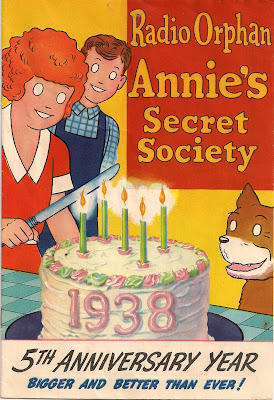 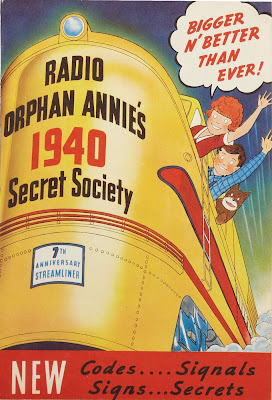 In 1932, RKO's Little Orphan Annie hit the movie theatres, starring 11-year-old Mitzi Green, a popular child actress of the 1930s.  Paramount released their own version in 1938, with Ann Gillis playing Annie.  Neither movie was a blockbuster, but for the kids it was probably a thrill to see Annie and Sandy on the silver screen.  Unfortunately, there were never any animated shorts.

It would be impossible to make a complete account of Little Orphan Annie merchandise in a mere blog post -- it just wouldn't fit.  Starting in the 1920s, there were everything from Little Orphan Annie sweaters to Christmas tree light bulbs.  Perhaps a thousand blog posts would do it.  But here's a few items and related paraphernalia: 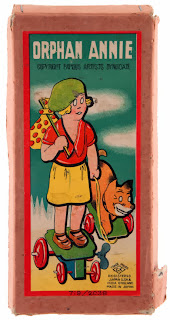 beautiful blog:) thanks a lot

This was a lot of fun to look at! I played Daddy Warbucks in my high school's production of the show back in 1990 (!), and just took my own kids, age 10 and 4, to see a local production, so my interest in the character of Annie and her world has been resparked, and I've been finding all kinds of interesting things online. Thanks for putting this post together!

Wonderful blog! I am researching Little Orphan Annie (LOA), and the real person who inspired James Whitcomb Riley to create the character. I am interested in finding out truly how much of an influence Riley's version of Annie - had on Gray's version. I believe there is more to this story than meets the eye.

From Gray and Riley both being Hoosiers -

To a reference I ran across somewhere that Gray worked very briefly for an Indy newspaper at the same time as Johnny Gruelle - a Riley intimate friend and the creator of Raggedy Ann...

To John T. McCutcheon - another Riley intimate - providing a letter of introduction for Gray to the Tribune ' s art sept...

To Sydney Smith, Gray's mentor and creator of the Gumps Strip (which Gray did the lettering) , who had oncebeen employed by Riley's former brother-in-law...

I see a lot of Riley influence here with loads of potential. Just need to find some documentation - if any.

The book that Harold Gray wrote in 1927 - are there copies online? Or which institution has it? Would love to look at that!

Would love to chat sometime about these theories if you are interested...

My email is orphananniesauthor@hotmail.com. I am also on Facebook.